Octave  and Major pattern
The semitone circle is, as indicated by its name, composed of semitones like a chromatic scale.
12 semitones exist within an octave  .  You can see the 12 notes on the outer circle indicated by 1,2,3,4,5,6,7,8,9,10,11,12.  Every piano key is such a semitone even as every guitar fret position.
A Major scale uses only 7 notes. So therefore some of the 12 semitones are skipped.
You see the 7 Major notes on the outer circle indicated by Roman figures : I,II,III,IV,V,VI,VII.
This pattern of skipped notes is characteristic for a Major scale and can be projected  along the chromatic scale just by turning the table.

Major and Minor scales
Turn the card so that the MAJOR arrow  (MAJEUR) points to the desired key.  eg. C major
Now you can read all the notes which belong to the C scale from left to right through the semicircular holes:  C,D,E,F,G,A,B,C.
At the same time you can read the accompanying Parallel scale at the other side of the card. Look on the MINOR arrow  (Parallel Mineur) :  A,B,C,D,E,FG,A

Diatonic chords
Diatonic chord s are chords proper to the scale. Every single note belongs to that scale.
All  diatonic chords  are represented vertically at the Roman figures I to VII. These are so called  the scale steps.
You can see that every major scale has 3 minor chords, 3 major chords and one Diminished chord.
This is always the case also for Minor scales. You read the chords from left to right through the circular holes.  Eg.  Maj C  on step I    contains  C,E,G    and  possibly a seventh (septime) B.
The three significant chords can be found on step I,IV and V.
I     Tonic chord
IV   Sub dominant chord
V   Dominant chord.
Many POP songs all over the world only use these three famous chords.

As result of these modifications the Diatonic chords shall be changed  too, to stay proper to scale. 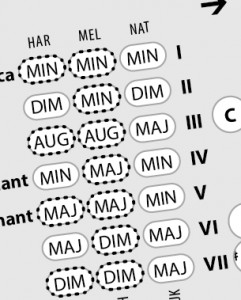 Note that the dotted lines correspond to the modified notes in the scale.

Example
On step II you see a   DIM chord  for the Natural Minor scale. However, on step II, a Min Chord belongs to a Melodic minor scale, according to column Mel

THE CHORD INDICATOR (Akkoordenwijzer)  shows the position of these Tonic + third + fifth + septime notes for all types of chords like major, minor, Diminished and Augmented chords.

Enharmonic notes
On  piano or guitar you don’t hear the difference between a B flat and A sharp tone. These notes sound the same but they have different names. These are so called Enharmonic notes.
These notes are shown in the black areas or in the semi-circular holes.
Question: which of the two enharmonic is the proper one to choose when defining a scale?
This depends on the scale itself and can easily be defined by following the rules:
Read the proper scale  always from left to right in the semi-circular holes.
Always follow the alphabetical sequence and be aware of the fact that every note exist only once within a scale.
Example  Scale major B flat consists of:
Bflat  C  D  Esharp  F  G  A   Bflat

Notes
In the Equal temperature of scale, an octave is equally divided in 12 semitones. There is no difference in sound for enharmonic notes.

The diatonic chords in this turn card are only represented by enharmonic in sharp notes.
Always define the proper enharmonic notes in the scale from left to right in the semi-circular holes.

Transpose chords and melodies
To analyse music, it is better to define the composition in applied scale steps, rather than the names of notes. The names of  notes will be different for each key but the scale steps won’t.
So when you transpose  a sequence of chords to another key. Then try to define the applied scale steps for each chord. For example, if chords are used on the I, IV  and V  chord step,  you simply read the transposed chords at the new key at exactly the same chord steps: I, IV and V.
Example:
When using the C major key and using the I,  IV  and V   or  C  F  and  G.
Turn to the new key  E major:   using the same steps  I  IV  and V .
This results in   E  A  and B  as the new chords for the new key.

Transposing  single notes is easy . First you define the number of semitones between the current and new key.  Between C key and E key you  count on the outer circle there are 4 semitones between. This means that every note  you want to transpose  will be increased by 4 semitones. To do this on the semitone circle, turn the table with number 1 to the desired note C and read at number 5 the transposed note E.
Repeat for every single note.

Shipping  to foreigh countries is possible depending on the location.
Just send an email to (see contact)